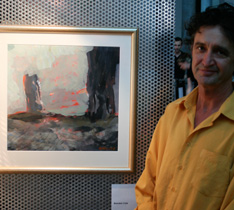 The ‘Emergence – Art on the Move’ exhibition showcases emerging and professional artists from all bushfire-affected communities throughout Victoria. Works dealt with the themes of the February 2009 bushfires and the truth of the recovery process.

The original exhibition was held over 2 weeks in February 2011 at the Atrium (Federation Square, Melbourne), it then moved on to Whittlesea for the last 2 weeks of April 2011.

Brendans painting ‘Blacking Out’ refers to the process of damping down all remnant fires & embers after a fire front has passed through. As a CFA volunteer, Brendan was in Redesdale after Black Saturday blacking out. “Sometimes, when we trained out hoses on seemingly dead black & smouldering trunks, the whole tree would explode, sending limbs flying. It amazed me how much energy they still had inside them. I remember hoping that some of the hidden energy would translate to some new shoots down the track.”

Share This
We use cookies for various purposes including analytics and personalized marketing. By continuing to use the service, you agree to our use of cookies.